What to say to The New Zealand Press Council response – “is there no obligation to accurately report the facts?”
Ever feel as though the media doesn't like one commenting on their well constructed and carefully tuned news pieces? The answer appears to be yes.
This essay continues the narrative around the New Zealand Press Council (NZPC) response to the Stuff (Fairfax) moderation of two comments I placed on their online articles 21 February and 5 March 2017.
The first part of the story is in this blog post:
https://values-compasspointsinaposttruthworld.blogspot.com/2017/03/dear-stufffairfax-why-did-you-refuse-to.html
The NZPC considered the matter at their Thursday 27 April meeting where they rejected my complaint after finding they had no jurisdiction to consider it. The second part of the series is here:
https://values-compasspointsinaposttruthworld.blogspot.com/2017/05/dear-fairfax-why-did-you-refuse-to-post.html
After I was forwarded the decision of the Council mid May I wrote the following post script to the Press Council and Executive Mary Major. Following the emailed comments, I bring my thoughts together under this heading;
'Catch 22 – structural brick walls that hide corruption.'
Here's dropbox link to pdf of original email:
https://www.dropbox.com/s/3l72hwfjee2k3su/Gmail%20-%20Press%20Council%20adjudication%2016-5-2017.pdf?dl=0
Here's the text;
-----000------
Hi Mary,
Thanks for the advice. I take it the decision will be uploaded to the Press Council website from Monday 22 May?
I accept the decision is final. I am disappointed with the specific decisions contained in paragraphs #10 and #18 of the Press Council decision.
Decision
[10] At the outset, we make it clear that the Stuff Terms and Conditions relating to online comment are a matter between Stuff and its readership. The Press Council has no jurisdiction over such terms and conditions. However, we do see those Terms and Conditions, particularly those relating to links to unchecked sites, to be a reasonable position for a publisher to take.
[18] We reiterate that the Terms and Conditions for online comment are a matter between the online publisher and its readership. It is not a matter for the Council, nor do we have any jurisdiction to interfere in it.
Thus we the public are bound to continue being provided with only an abstract or a misrepresentation of the full story from official news channels with which to inform the democracy.
I will consider your decision further carefully, as I strongly view the status quo represents a systemic break down or loophole in the process of checks and balances to ensure the press reports accurately - this is borne out in previous reporting about security crises leading to decisions to go to war.
If the press feel they can get away with misrepresenting the facts or only partially reporting matters without a credible check, they may feel justified in their continued 'poor practice', especially on the critical issues of whether the state elects for war or peace.
I draw your attention to the hammering the press have provided POTUS Trump and his decisions as President. However in the case of the Syria crisis, where the US identified that the Syrian Government had gassed it's people with Sarin gas in early April 2017 and then proceeded to bomb the Syrian Airfield in retaliation or as a method of discipline, the facts of who had released what, were less clear than the White House suggested.
Without any fact checking the Western International Press immediately closed ranks and praised the decision to bomb the evil Assad regime! So Trump is an automatic nut on all other decisions except when it comes to starting wars!
The following article explains my thinking and reasoning so I'll merely reproduce it here:
https://consortiumnews.com/2017/04/18/nyt-mocks-skepticism-on-syria-sarin-claims/
And here is MIT rocket scientist Theodore Postol's Counter to the White House 4 pager from April 2017:
https://drive.google.com/file/d/0B_Vs2rjE9TdwR2F3NFFVWDExMnc/view
Stuff reports were similar in tone. There's no hint that the Sarin gas attack might be the work of agents from one of the insurgent groups in Syria:
http://www.stuff.co.nz/world/middle-east/91331533/Live-US-retaliates-for-suspected-chemical-weapons-attack-in-Syria
This pulled from Fairfax's Sydney Morning Herald: http://www.stuff.co.nz/world/americas/91351778/Donald-Trump-puts-the-world-on-edge-with-Syria-missile-attack
This one a repost of the Washington Post: http://www.stuff.co.nz/world/americas/donald-trumps-america/91379116/donald-trump-lauds-us-military-defends-attack-on-syria
Which carried one out of context photo with no reference in the story. Was this the balance to the war party scream for blood? 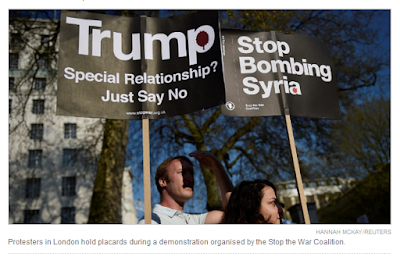 As the world becomes more stressed from the growing perfect storm of constraints, environmental, social and population, economic, resources, food and toxic pollution the role of those who inform the population will become increasingly important.
We cannot allow ourselves to be sucked into more genocidal wars for empire!
I'm not concerned about the publication of 'my comments' so much as the principle of being able to counter the MSM's tendency to replicate fake news and provide it to the public as Gospel when it is the work of the 'devil of war.'
My whole argument and the references I provided were in relation to the willingness of the press to prostitute itself for 'the war party' - well done.
I believe the Press Council has lost its moral/ethical bearings with the decision on my complaint #2574, notwithstanding any jurisdictional technicality. Surely you are at liberty to make a statement on principles.
The effect of your decision is that you wash your hands - electing not to uphold the central philosophy which underpins press freedom, "the obligation to accurately report the facts."
This from the US - how to get truth into the media so that the public is informed where the media elect to not report or block where it suits their interest? This on FOX and it's story on Monsanto and its bovine growth hormones in the United States...
https://www.youtube.com/watch?v=gVKvzHWuJRU
We are part of the US Western empire and the influence is pervasive. Look to how the FOX News chief shut down the story. Only in the US?
I suggest the NZ Press Council think deeply on the implications.
With respect greg
Greg Rzesniowiecki

Attached your decision #2574
(Note for reader: There were a couple of attachments)
-----000-----
Catch 22 – structural brick walls that hide corruption
I face a similar problem attempting to extract information from the GCSB and NZSIS relating to the Iraq war. The GCSB (intelligence services) had told the Clarke Labour government in the lead to the 2003 Iraq War that there was no justification to go to war. I was given this information by the then Hon. Phil Goff in a Select Committee hearing in 2014, so on the parliament public record, thanks Phil. I asked the NZSIS and GCSB for the information in correspondence 25 December 2015. (NB. I'll write up the OIA saga in another blog piece to follow this. I write to record the act after I've allowed the process to run its course.)
They are still dodging the bullet as the implication is that the Western Coalition of the Willing waged war of Aggression, the worst crime. The matter is with the Chief Ombudsman Judge Peter Boshier, who has indicated in his provisional opinion (PO) in relation to one matter, that he will not support my complaint as the New Zealand government acts within the Official Information Act provision in that 6 (a) and (b) of the OIA. These effectively give cover where information might prejudice national or security interests or where the information is received from a protected source; 'an intelligence confidant likely the US National Security Agency (NSA) or CIA.' - Catch 22 again!
Here we appear constrained by some international treaty which presumes a lawful obligation – what of the larger prohibition in international law to stop war?
The fact of an agreement (UK-USA Intelligence Sharing treaty known as Echelon or Five Eyes) that we won't divulge privileged information that is 'evidence of the crime of Aggression,' is of more import than highlighting the crime and prosecuting those who committed the acts.
Here we approach law as a nonsense!
The only sense is to provide the means to repeatedly go to war – do the New Zealand Government agree knowingly and importantly willingly?
Which makes the NZ Government and those components of the State who are aware of the institutional implication complicit in the Crime of Aggression.
It is evident to me that the OIA is similar to the structure of the Press Council principles and rules for dealing with complaints.
It is framed as a method to structurally avoid exposing government processes to transparency particularly those central to the relationship with nation states including the US. The 5 Eyes intelligence sharing agreement is one such impediment as it requires that all transmissions are privileged information.
Catch 22 – key to unlock – “public interest for a secure and peaceful world of states”
Public interest for security ought be the definition of national security.
Public interest is not advanced where states wage aggressive war for profit; whether to gain territory, or for the commercial advantage of its corporations, including for resources or the rights to control resources and infrastructure. Where they do wage war, the universal public interest is destroyed particularly for those genocided or collaterally damaged in the business opportunities created in the waging of war – see US General Smedley Butler for the key to why we (humans and their institutions) still wage war, his speech; “War is a Racket.”
https://www.ratical.org/ratville/CAH/warisaracket.html
Wikipedia on Smedley Butler: https://en.wikipedia.org/wiki/Smedley_Butler
Audio essay on Smedley Butler by The Corbett Report is edited, webmastered, written, produced and hosted by James Corbett who has been living and working in Japan since 2004. He started The Corbett Report website in 2007 as an outlet for independent critical analysis of politics, society, history, and economics:
https://www.youtube.com/watch?v=J9OFRdCq56k
The war for profit (war is a racket thesis) is as strong today as it has ever been. The corruption is what gave us thee 9/11 event and the subsequent for profit wars.
The whole of my purpose herein, is to bring to light the corruption and institutional collaboration which checks or foils the public ability to identify the depravity of the state and its actions.
What happens where the information I seek is provided?
Where the state might object and state that it acts to protect the people from a terrible truth, "that independence from the US would be a dangerous choice" – it highlights the coercion that is factored and leveraged into the relations between states in this case between the US and NZ. What democracy? What noble global order?
To my mind it is preferable that the intelligence that the state collects on the depravity of other states is exploded into public light so we the people are able to digest the nature of the world.

This will then inform the democracy – and the result - new policy responses will be required to build an independent, sustainable and resilient state.
Values, science, common sense and policy outcomes
International affairs and geopolitics will remain the plaything of the powerful with ongoing tragic outcomes for people in developing nations of the Near East, North Africa and possibly in Central and South America. These are ill-equipped to counter the plots and insurgencies that run through their states.

The US is repeatedly striking in Yemen - both through the agency of proxies as well as supporting the Saudi Arabians, most recently with a contract for US$110billion worth of military contracts. The connection to monetary transactions in the 'for profit' munitions industry is evident for any with eyes to see.
The war front advances – it will consume the whole planet left unchecked.
Who will help us, help ourselves?

Values based public interest is needed in public policy settings.

Trade and Investment treaties cross over into many areas of public policy and have geopolitical implications, trade, war, inequality, sovereign and community rights.

I work as a public advocate to stop the TPP, Regional Comprehensive Economic Partnership (RCEP) and Trade in Services Agreement (TiSA) from wrecking our nation and planet.

My only income is from public donations.

To sustain Greg continue this work contribute to Kiwibank account: